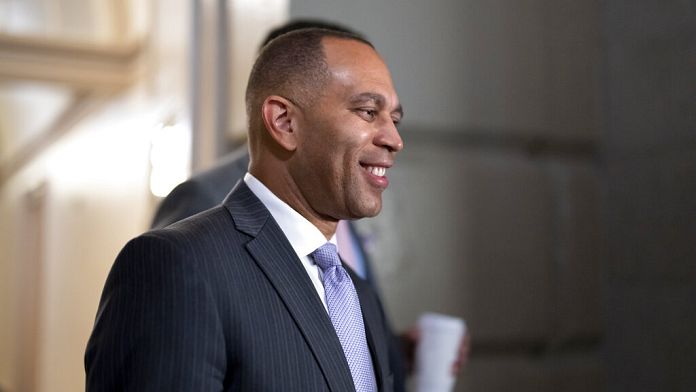 The day after Speaker Nancy Pelosi announced she would be stepping down, House Democrats appear likely to vote for New York Rep. Hakeem Jeffries in a historic move to elect the first black American to lead a party in Congress.

Jeffries pledged to create inclusive leadership while Democrats work back to majority status in the House of Representatives, which Republicans seized control of in the midterm elections.

“The House Democratic Caucus is the most authentic representation of the magnificent mosaic of the American people,” Jeffries said in a letter to colleagues.

“I am writing to humbly ask for your support for the position of Democratic leader in the House of Representatives as we once again prepare to meet the moment.”

Rep. Katherine Clark of Massachusetts and Rep. Pete Aguilar of California — who have worked together as a lower-level leadership team — were all quick to write to their peers with their bids for first, second, and third positions in the Democratic leadership.

House Democrats will meet behind closed doors as a caucus in two weeks to select their members.

So far, Hakeem Jeffries, Katherine Clark and Pete Aguilar have no declared challengers.

Pelosi told reporters she would not make recommendations because she believed it was better not to “anoint” new leaders but to give them the confidence to develop themselves.