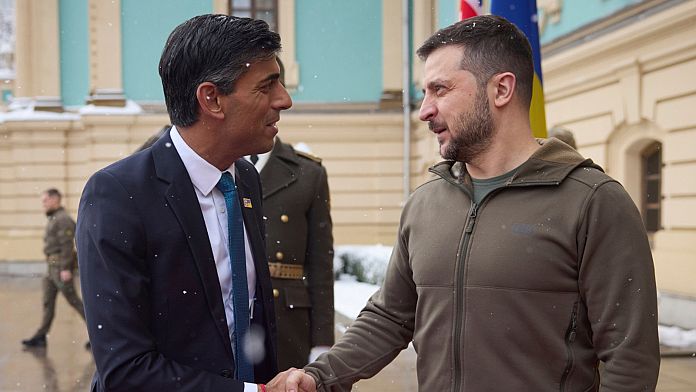 The air defense package, which Britain estimates at £50 million (€47 million), comes as Russia bombs Ukraine’s power grid and other vital infrastructure from the air, causing power outages for millions of Ukrainians as the frigid winter cold draws near.

The package includes radar and other technologies to counter the Iran-supplied exploding drones that Russia has used against Ukrainian targets. It comes on top of a delivery of more than 1,000 anti-aircraft missiles announced by Britain earlier this month.

The UK has been one of the staunchest Western supporters of Ukraine’s resistance to the Russian invasion, giving Kyiv £2.3 billion in military aid.

Zelenskyy described the two countries as “the strongest allies”.

“With friends like you by our side, we are confident in our victory. Our two nations know what it means to stand up for freedom,” the Ukrainian leader said on Twitter.

“The courage of the Ukrainian people is an inspiration to the world,” Sunak said in a commentary alongside Zelensky at the presidential palace. “For years to come, we will tell our grandchildren your story.”

He pledged that Britain “will stay with you until Ukraine has won the peace and security it needs and deserves, and then we will stand by you as you rebuild your great country.”

Former British Prime Minister Boris Johnson, who resigned in July amid a spate of ethics scandals, drew widespread praise in Ukraine for his support.

Sunak is keen to reassure Ukraine’s leaders that there will be no change of stance under his leadership, although as Britain’s chief financial officer under Johnson he was seen as opposed to demands for increased defense spending.

Sunak said it was “deeply humbling” to visit Kyiv “and have the opportunity to meet those who are doing so much and paying such a high price to defend the principles of sovereignty and democracy.”

Zelenskyy said: “We discussed the most important issues both for our countries and for global security.”

“Together we are stronger and we will achieve the desired results,” he said on Telegram.

The video posted by Zelenskyy showed him greeting Sunak at a presidential palace as snowflakes fell and the two men engaged in talks.