Good news: the scientific solution to ending nightmares and the largest seagrass patch discovered to date 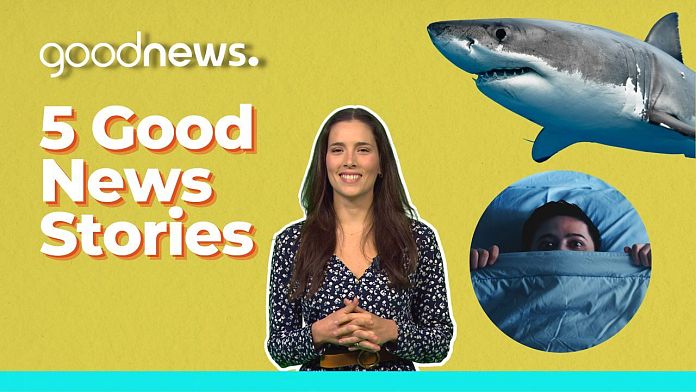 This is your weekly roundup of the good news.

Click on the video above for the full synopsis and learn more about:

Scientists have found a treatment that could finally put an end to recurring nightmares; camera-equipped sharks have mapped the largest patch of seagrass discovered to date; a new record label brings forgotten female composers out of oblivion; Barcelona’s eco-friendly school bus; and the green school in South Africa, designed to inspire you to achieve your dreams.

Here are all the details:

1. Scientists have found a treatment that could finally put an end to recurring nightmares

The first is Imaginative Rehearsal Therapy, or IRT. In it, people have to remember their nightmares and change the negative plot in them to give it a positive twist.

In about 30 percent of patients, practicing this affirmative dream scenario during the day has been shown to reduce nightmares after two to three weeks.

What about the remaining 70 percent?

This is where something called targeted memory reactivation, or TMR, comes into play.

TMR is a process in which a person focuses on learning something (e.g. the positive nightmare spin) while listening to a specific sound, which is then repeated as a cue while the person sleeps.

In those who tested a combination of IRT and TMR, the bad dreams almost completely disappeared, with the average number of nightmares falling from three to 0.2 per week.

Find out more about the research into ending nightmares here, written by Giulia Carbonaro for NEXT, Euronews’ forward-thinking column.

A group of eight sharks, swimming through the deep like underwater Google Street View cars with biodegradable cameras on their dorsal fins, have mapped 92,000 square kilometers of seagrass in the Bahamas. That is twice the size of the previously largest known seagrass bed in Australia’s Great Barrier Reef.

Seagrass sequesters 10 times more carbon per hectare than the Amazon rainforest, making this newly discovered area one of the world’s largest carbon reservoirs.

“The shores of the Bahamas are such a vast environment that it’s impossible for human divers to cover, so the tiger sharks actually did their research [it] for us,” says Dr. Carlos Duarte, Science and Policy Advisor to the Board of Beneath the Waves, the organization that runs the initiative.

Duarte says the discovery is remarkable evidence of “how little we still know about the ocean” and that it is a call to action to invest more in exploring the big blue, as it could offer great benefits.

Among other things, Beneath the Waves learned from the experiment that tiger sharks spent significantly more time in areas where there were seagrass beds.

Sharks have been protected in the Bahamas for almost 30 years, “…and we now know that the seagrass meadow could have really, really big ecosystem services and economic benefits for the people of the Bahamas, so it’s really not far-fetched to say that you’ve got people.” can protect if you protect the sharks,” said Austin J. Gallagher, Principal Investigator and CEO of Beneath the Waves.

3. A new record label is bringing forgotten female composers out of oblivion

French cellist Héloïse Luzzati had spent around three decades studying and performing classical music before realizing that she was only ever performing works created by men.

The contribution women have made to classical music has received little recognition. Few works by women are published and therefore even less are recorded.

The problem, says Luzzati, is that “a book can be read and a painting looked at, but music, unless played or recorded, ceases to exist.”

The first release was a three-disc box set of works by the late French composer Charlotte Sohy, who died in 1955 and published music under her grandfather’s name to avoid prejudice.

The initiative also includes a festival – “Elles – Women Composers” and a YouTube channel to highlight the work of little-known women composers.

A new school transport system, the Bicibús, is taking Barcelona by storm, with a peloton of happy kids biking to and from school.

“The goal is to safely accompany the children to school while giving them the opportunity to feel part of a group,” says Helena Vilardell, founder of Canvis en Cadena, the organization behind the Bicibús initiative.

The cycling attendants – parents, teachers and other volunteers – pick up and drop off the children along the route, just like a conventional school bus.

Launched in September 2021, the initiative has already brought mass cycling to more than 1,200 children in more than 70 schools in 25 cities in Catalonia.

The best part? It’s very repeatable, organized by family associations and schools, good for the kids and good for the environment.

Children even report that they enjoy cycling on rainy days because it is fun to “ride through puddles.”

“There’s a roof in the car and you can’t see the sky,” says another child in a video posted by Bicibús on YouTube.

5. The Green School in South Africa, designed to inspire you to achieve your dreams.

The good news of the week is Alba Brandt, a South African missionary.

After spending six months in Bali, Indonesia on a family adventure with her husband and three daughters, they decided to start South Africa’s first “green school” based on a similar school the children had attended in Bali.

“We really wanted to create the same experience for our children in our local context. We love living in South Africa. So we came back. We were looking for land. We designed the campus we built during COVID. And we were open last year until 2021,” says Brandt, co-founder of the “Green School” with her husband.

“Our children could then continue with a Green School curriculum based on joy and wonder, teaching children and families and teachers a great deal about how to live sustainably on this planet.”

The Green School is the first of its kind in South Africa; It aims to nurture a new generation of environmentally conscious citizens and foster children’s creativity and resilience in the face of the climate crisis.

Sara Samanani, a 14-year-old student at the school, says she was a little “skeptical” at first.

“I thought, am I really going to do what I need to do at this point in life? But then I realized we’re still learning the same things, just I think in a generally better environment.”

Samanani says the way classes are conducted at the Green School has improved her concentration. “We have breaks. We have time where we can talk; We talk to our teachers as if they were our friends,” she says.

If you liked this good news, like this video, leave us a comment and share with your friends. And always remember, some news can be good news.