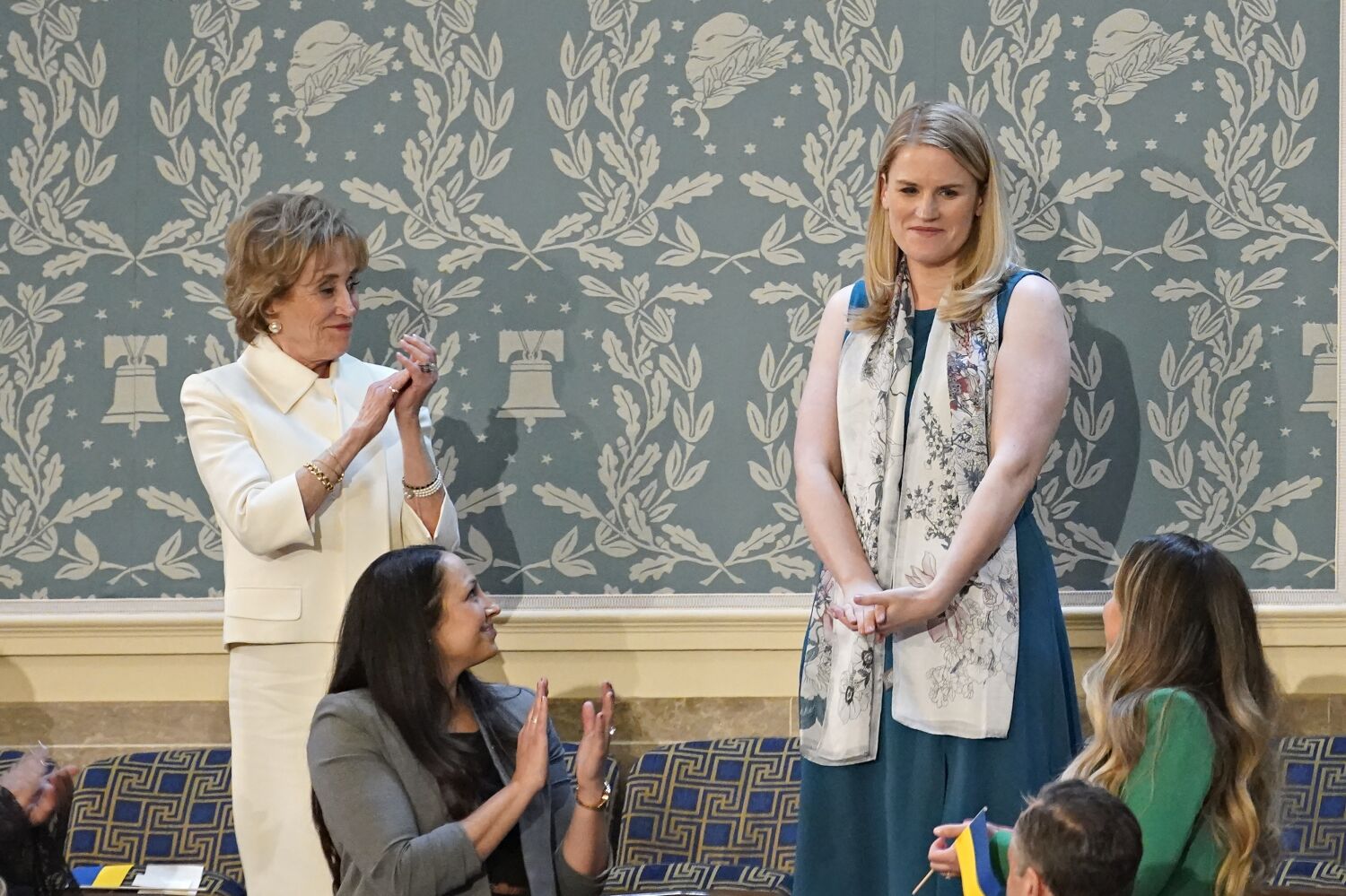 Frances Haugen was cooking dinner one Friday night when her phone rang. On the other end of the line was the White House.

Deputy Chief of Staff Bruce Reed asked whether Haugen could come to Washington in four days. She had been chosen to be the First Lady’s guest at the upcoming State of the Union.

“It was actually slightly disturbing,” recalls Haugen, who lives in Puerto Rico. “But you know – the kind of disturbance you don’t mind.”

It wasn’t until October, during a “60 Minutes” interview, that Haugen had it for the first time made themselves publicly known as a whistleblower who leaked thousands of pages of internal Facebook documents to Congress, the Wall Street Journal, and the Securities and Exchange Commission.

These disclosures – which were subsequently made available to many other news outlets, including The Times — turned the former Facebook product manager into the face of a long-running backlash against Facebook, its sister app Instagram, and the social media industry. By releasing files showing that Facebook (which has since changed its name to Meta Platforms) was internally aware of a variety of issues with its products, including what effect they can have On the subject of teenage mental health, Haugen offered critics of the company what looked a lot like a smoking gun.

The transition to public figure was unlikely for Haugen. “I don’t crave attention,” she told the Times. “When I first got married, I eloped. I’ve had two birthday parties in about 20 years.”

But now, her profile boosted by a shout-out from the president in the State of the Union address, Haugen is making the most of her new soapbox. That means championing efforts to solve the same problems she helped expose, also in California.

The focus of their efforts is a bill that finds its way through the State Assembly. Dubbed the California Age-Appropriate Design Code Act, it would require web platforms that kids will likely use to set them up data protection measures B. Defaulting user preferences to high privacy, describing privacy policies in language children can understand, and prohibiting the use of children’s personal information for any purpose other than the purpose for which it was originally collected.

“I don’t want to give too many credits for it [the bill] because I didn’t play a part in the design,” Haugen said. “But I’m a strong proponent that we need to start extending the same standards that we have for physical toys for kids to virtual space, because there are quite a few right now pretty crazy consequences that happen because these products aren’t designed for kids.”

Haugen held a question and answer session for state legislators in Sacramento a few weeks ago – “I’m very willing to help answer questions for anyone who wants to understand more about the implications [of] Algorithms are” — and also spoke at the Mom 2.0 Summit, a Los Angeles gathering for parenting influencers in late April.

It’s no coincidence that Haugen focuses largely on how social media affects her youngest users. Although their disclosures shed light on a variety of Internet issues — disinformation, radicalization and human trafficking — it was content about children and young people that seems to have moved lawmakers the most.

Specifically, internal Facebook research, which Haugen helped publish, showed that nearly a third of the teenage girls surveyed by the company said, “If they felt bad about their body, Instagram made them feel worse.” Facebook had a history of downplaying its impact on young users’ mental health, the Wall Street Journal reported at the time.

The company has claimed after the leak that its research was misrepresented, but the revelation still set off a spark Congress- hearings and although the Age-Appropriate Design Code Act was developed independently of Haugen, it upped the ante of the California bill.

“Frances has raised tremendous public awareness of this cause, particularly as it relates to children,” said Rep. Buffy Wicks (D-Oakland), who authored the Design Code Act, in an emailed statement. “I’m grateful that she came to Sacramento last month to speak with legislators and attorneys and that she continues to lend her voice and expertise to explain why policies like the Code are needed to protect children online .”

Haugen said she wasn’t surprised that this part of her leaks had garnered so much interest.

“The solutions to many of the problems described in my disclosures are actually quite complicated,” she said. “When it comes to children, it’s really easy.”

The impact of social media on children has become such a hot topic that a second bill with a similar focus is now also going through the Assembly: the Social Media Platform Duty to Children Act, which would allow parents Sue social media companies for designing addictive software. Haugen said she was unaware of the bill, but co-sponsor Jordan Cunningham (R-Paso Robles) told the Times in March her leaks were a catalyst for it. (A Cunningham representative said the rep has not worked or spoken directly with Haugen. Wicks, the Oakland Democrat, is also a co-sponsor of the Duty to Children Act.)

Common Sense Media, a non-profit organization, played a prominent role in Haugen’s advocacy Analyze the effect Media and Technology on Young People, and Jim Steyer, Founder and CEO. Common Sense Media asked Haugen if she would help him support the Age-Appropriate Design Code Act, the whistleblower said, and she said yes.

“Frances has proven to be an excellent partner for us because she…does a great job of explaining how the technology platforms work, some of the harms involved, and why we need comprehensive laws and regulations,” said Steyer, the Brothers of 2020 presidential candidate and hedge fund billionaire Tom Steyer.

His organization has been working with Haugen for about five months, Steyer said after her legal team approached her about working together could work.” (Wicks formerly worked at Common Sense Media.)

The organization also worked with the White House to bring Haugen into the state of the nation, Steyer said.

Haugen’s influence extends beyond the west coast. She estimates that she spent around five and a half weeks in Europe working for support a landmark law of the European Union – the Digital Services Act – which would force social media platforms, including Facebook, to moderate hate speech, disinformation and other user-generated content more aggressively, and ban online advertising that targets children. Both the European Parliament and the Member States of the European Union have agreed on the contents of the DSA, although it is still subject to formal approval.

“Up until the DSA pass, that was the main focus of providing support to create awareness,” Haugen said. She was there “to support legislators, to give testimony, to meet with different ministries [and] Meeting with other civil society groups”, and also wrote a New York Times opinion piece in support of the law.

She’s also committed to environmental, social and governance, or ESG, efforts aimed at helping investors “have criteria by which to judge whether or not social media companies are acting pro-socially,” she said, and is working to start a nonprofit organization that will combine that work with litigation support as well as educational efforts focused on educating people about social media. Steyer said his organization helped Haugen “incubate” their nonprofit.

It’s a meteoric rise for someone who didn’t have a national profile less than a year ago.

“When I released the documents to the SEC and Congress, I had no expectations of what would happen,” Haugen said. “My primary goal was that I didn’t want to carry the burden of knowing something and doing nothing for the rest of my life.”

But despite everything that’s happened since she’s come public — White House calls, trips to Europe, standing shoulder to shoulder with California’s political heavyweights — Haugen said the main difference she’s experienced in recent months is weight been taken from their shoulders.

“The biggest thing that has changed in my life,” she said, “is that I can sleep at night.”