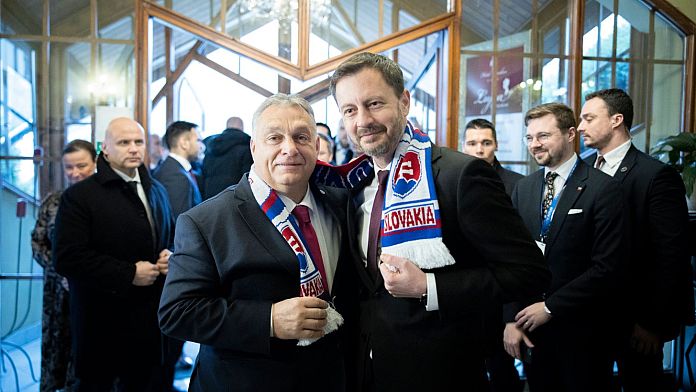 Heger presented the garment to Orbán on Thursday at a summit of Visegrad (V4) faction leaders in Slovakia.

The Hungarian prime minister was criticized for this by his European neighbors Advertisement for “Greater Hungary” at a recent soccer game.

A map on his scarf showed the borders of the former Kingdom of Hungary – lost in the Treaty of Trianon in 1920 – which includes what is now Austria, Croatia, Romania, Serbia, Slovakia and Ukraine.

The Romanian Foreign Ministry accused Orbán of “revisionism”, while Kyiv demanded an “official apology” from Budapest.

“I noticed that Viktor Orbán has an old scarf, so today I gave him a new one,” Heger said wrote on Facebookand added that “winter is coming”.

Orbán also shared a picture of himself with the new Slovak scarf next to Heger, but did not immediately address the matter.

Orbán had dismissed criticism of the scarf, arguing that the “Hungarian national football team is the team of all Hungarians, wherever they live”.

The loss of two-thirds of its territory after World War I is seen as a national tragedy by a large section of Hungarian society.

The four European countries are expected to discuss their foreign policies and sanctions following Russia’s invasion of Ukraine in February.

The meeting in Kosice will be the first in months after Czech delegates boycotted previous V4 meetings over Hungary’s continued close ties with Moscow.

Alongside Turkey, Hungary is the only NATO member that has not yet ratified Finland and Sweden’s accession to the military alliance.