Hiltzik: The oil industry relies on your health 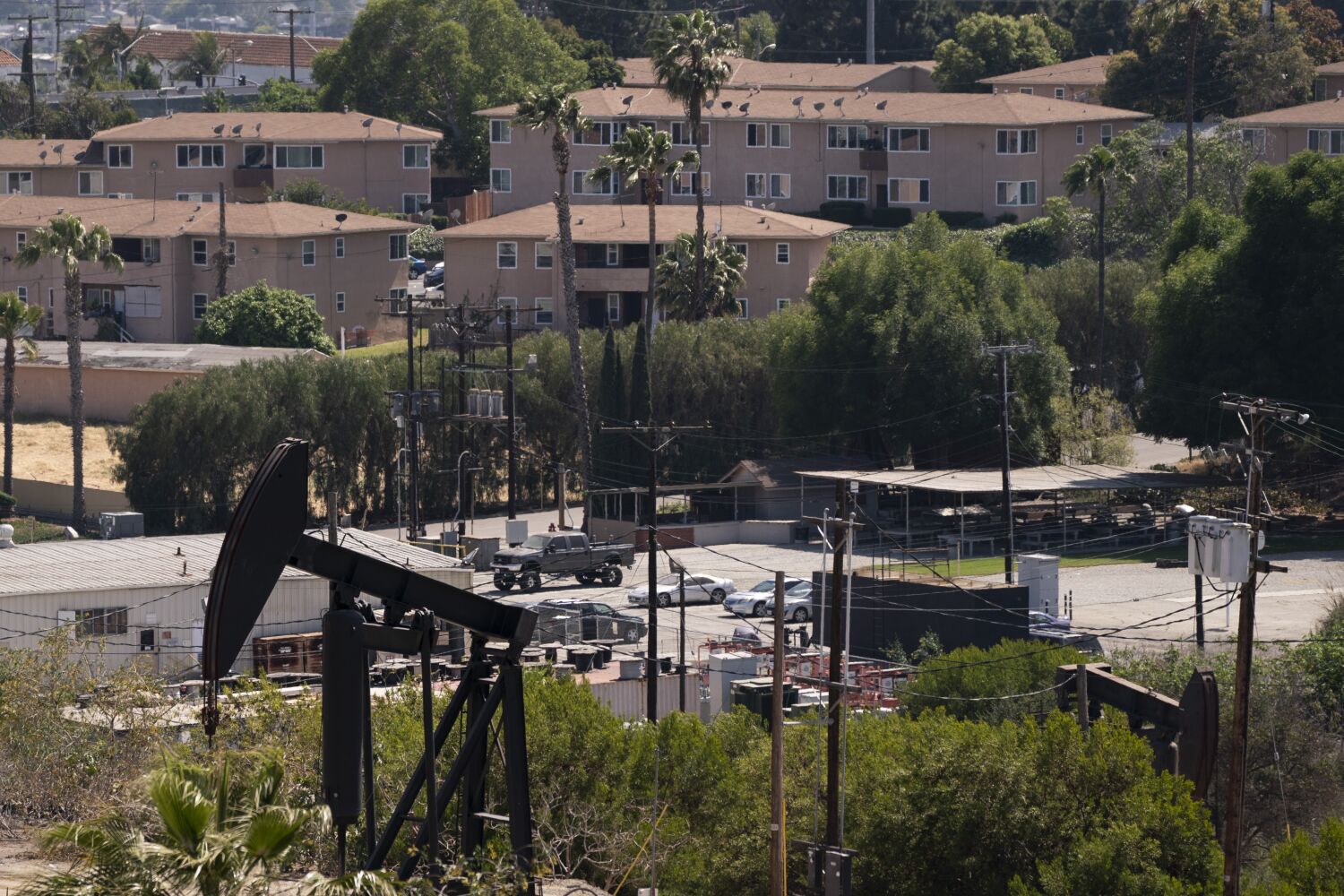 The oil and gas industry, accustomed to getting its way from California regulators for decades, suffered a rare defeat this year.

That happened in September when Gov. Gavin Newsom signed Senate Bill 1137, which mandates a minimum distance between new oil and gas wells and places where people live and work, such as homes, schools, and health care facilities.

That distance is 3,200 feet – about two-thirds of a mile, or about a kilometer. More than 2 million Californians live that distance from an active oil or gas well, disproportionately low-income residents or people of color.

To say that [the standard] Scientifically unfounded simply means not paying attention to the overwhelming evidence that is out there.

If you thought the industry would sneak away and accept its loss in Sacramento, you don’t know our oil drillers.

Instead, they launched a multi-million dollar campaign to overturn the law at the ballot box. On Wednesday they crowed that they had collected more than 978,000 signatures to hold a referendum on the 2024 vote.

To date, their war chest weighs in at more than $20 million, raised mostly by independent oil and gas drilling companies. You can expect it to swell much, much more because so much is at stake; California produced about 146 million barrels of crude oil in 2021, worth about $10 billion to $12 billion at current prices.

You can also expect the war chest to be spent on a campaign of deceit and nonsense that typifies corporate attempts to overturn regulations they don’t like (which most of them are).

We can say that because the process is already underway. The oil and gas drillers have been promoting their planned referendum with the slogan “Stop the Energy Shutdown”.

This suggests the law would close existing wells and ban new ones, which is not true: SB 1137 only applies the minimum distance rule to new and converted wells and requires more comprehensive environmental reporting only from existing wells. Nothing is “turned off”.

The California Independent Petroleum Assn. (CIPA) is just the latest in a series of efforts by big business to overturn California’s laws at the ballot box.

The epitome is Proposition 22, the 2020 referendum funded by Lyft, Uber and other gig companies that aims to exempt themselves from a state law restricting their misclassification of drivers and delivery drivers as independent contractors rather than employees.

The companies succeeded in a campaign that cost more than $200 million, a record, and stripped their workers of minimum wage, workers’ compensation and other protections. Proposition 22 is currently under review in a state court.

Also in 2020, the surety bond industry — made up of giant international insurance companies masquerading as mom and pop shops — managed to repeal a California law that abolishes cash bail. The repeal was a setback to efforts to reform a feature of the justice system deeply infected with racial prejudice.

In the 2024 state vote, the restaurant industry is likely to contest a 2022 state law that sets minimum wages and job protection rules for fast-food workers. The industry has submitted more than 1 million petition signatures, far exceeding the 623,000 needed to get the referendum before voters.

The referendum process benefits the goals of the laws, even if they don’t ultimately prevail at the ballot box. This is because a law cannot come into force while an active referendum is awaiting a vote.

Referendums can only be held during general elections, which are held every two years. If the oil and gas referendum qualifies, the setback bill would be suspended until at least late 2024, rather than taking effect this January. 1.

It is correct to point out a salient point in CIPA’s history. The organization took a particularly aggressive stance on environmental critics of the drills beginning in 2015, but ended up shooting itself in the foot.

The critics questioned the city of Los Angeles’ lenient policy, which they said had stamped oil drilling permits in violation of California’s Environmental Quality Act. They accused the city of being particularly lax about drilling applications in and near predominantly Hispanic and black communities.

After the city tightened its procedures, CIPA sued the environmental groups. A state appeals court dismissed the lawsuit and ordered CIPA to pay $2.3 million in attorneys’ fees. Embarrassingly, CIPA had to file for bankruptcy. The restructuring plan was finally approved by the bankruptcy court in September.

The industry campaign against the new minimum kickback rule began even before Newsom signed SB 1137 in September. 16. As the measure made its way through the legislature, the California Chamber of Commerce put it on its “job killers” list. That was as sure a signal as one could hope that the law would put the public interest above corporate interests, just like the law overturned by Proposition 22 and the fast-food law in the restaurant industry’s crosshairs.

The industry’s main claim is that the law will force California refiners to buy more overseas supplies by hindering the development of new wells, which will drive up prices at the pump. The drillers also say the 3,200-foot standard is “without any scientific basis.”

Both claims are wrong. Let’s take them individually.

The paperback argument is always the industry’s trump card when trying to challenge a new law or regulation. You know the drill: “This law will be expensive she Money.” In this case, it blows smoke. California crude prices reflect the global oil market; whether California wells produce a drop of oil more or less — or even thousands of barrels a day more or less — has no impact on what you see in the pay for the pump.

As my colleagues Laurence Darmiento, Sean Greene, and Vanessa Martínez reported, refinery margins are among the most important non-global contributors to California gasoline prices, which for some inexplicable reason average more than 69 cents a gallon on the West Coast compared with 54 cents nationally.

And it’s not as if California’s drillers would be able to increase production if only they could drill wells wherever they please.

The truth is that the production capacity of the state’s oil fields has been declining for years – current production is only about a third of what was achieved in the mid-1980s. That’s not because drillers are paralyzed by rules and regulations, it’s because there just isn’t as much oil to be found as it used to be.

This is misleading at best. Local laws typically require throwbacks of no more than 300 to 500 feet. Prior to SB 1137, no state statute addressed the health hazards of oil and gas wells through clearance requirements, although state fire codes prohibit drilling wells within 300 feet of schools, health care facilities, prisons and “places of assembly” such as churches.

That brings us to CIPA’s claim about the science behind the 3,200-foot rule – or rather, their absurd argument that there is no scientific basis.

The standard, written in SB 1137, is based on the findings of a 15-member scientific advisory panel that reported to the California Geologic Energy Management Division (CalGEM) in 2021. The panel examined more than 60 peer-reviewed studies on the relationship between oil and gas development activities and health problems in neighboring communities.

“To say that [the standard] Scientifically unfounded simply means not paying attention to the overwhelming evidence that is out there,” said Rachel Morello-Frosch, an environmental health and policy expert at UC Berkeley and co-chair of CalGEM’s scientific panel. “Tons of studies that looked closely at the distance of a kilometer. It wasn’t conjured up out of thin air.”

What was most striking about the studies was the “consistency of the results,” says Seth BC Shonkoff, executive director of the Oakland-based research institute PSE Healthy Energy and other co-chairs of the scientific panel.

“These studies were conducted using different methods, in different locations, with different population groups, and over different time periods,” Shonkoff told me, but all found an association between oil and gas drilling and health effects on local populations, including low birth weight in newborns , premature births, respiratory diseases and leukemia.

Some studies have focused on the particular substances and conditions that residents are exposed to near active wells, says Morello-Frosch. Wells emit a volatile miasma of carcinogenic hydrocarbons such as benzene and toluene, and their effluent can contaminate subterranean water tables that neighbors rely on for household supplies.

Not only do these surgeries contribute to air and water pollution, but they also cause noise and light pollution, which some studies suggest increases the risk of cardiovascular diseases such as high blood pressure and sleep deprivation, which can affect residents’ mental health.

Low-income communities crowded around oil fields — or rather, drilling ramped up near vulnerable communities — before modern environmental justice concerns were taken seriously. As a result, millions of nearby residents can be bombarded not only by isolated or discrete sources of pollution, but also by widespread attacks by multiple and extensive pollutants.

If the CIPA referendum qualifies for voting, voters across the state — not just those who live and work in close proximity to oil and gas wells — will be faced with a very different form of pollution — pollution of the airwaves and of mailboxes that surges when well funded Industries are trying to get Californians to vote against their best interests.