Summary of your good news: Swear words can make you more resistant to pain and more… 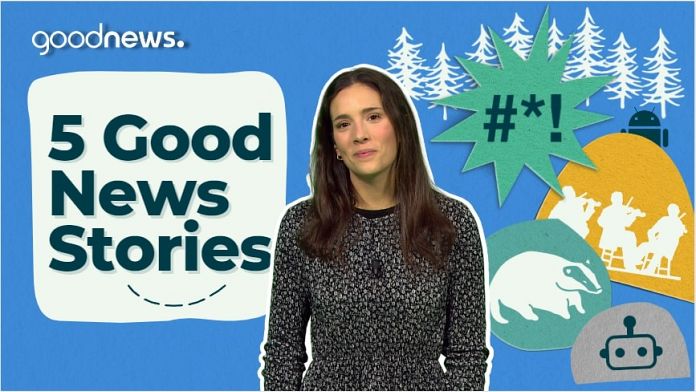 This is the good news summary and these are this week’s positive developments:

Click on the video above for the full synopsis and learn more about:

1. The EU has agreed to ban imports of products that drive deforestation

Overall, between 1990 and 2020, an area larger than the EU was lost to global deforestation. Part of the blame for this lies with European consumption, which accounts for around 10 percent of global losses.

The good news is that EU lawmakers and governments have agreed to pass new legislation that will ensure products sold in the region are more environmentally friendly.

Companies must prove that the goods they import have not caused deforestation or forest degradation anywhere in the world since 2021 and that they comply with rules on human rights and the protection of indigenous peoples in the country of origin.

The European Parliament’s Environment Committee called the agreement a “world first” and said it affects “the coffee we drink in the morning, the chocolate we eat, the charcoal we use for grilling, the paper in our books”.

The new rules will impose a duty of care on companies looking to place their derivatives on the European market, including palm oil, livestock, soy, cocoa, timber and rubber, European Commission spokesman Adalbert Jahnz said, adding the deal “will become part of the European contribution to the world conference on biodiversity, the COP15, which starts in Montreal.”

The arrival of robots in the workplace has been a concern for decades.

But now that humanoid robots are actually emerging, the picture is changing, with some seeing robots as promising teammates rather than competitors.

The pace at which the robots perform the scans is impossible for humans to match, and a timely scan can ultimately save lives.

According to the World Health Organization, up to 14 million people worldwide suffer from rheumatoid arthritis.

The automated clinical robot, dubbed ARTHUR, uses a robotic arm to methodically scan the 11 joints on each hand, a procedure that often reveals early signs of the disease.

Soeren Andreas, specialist in rheumatology at Odense University Hospital in Svendborg, says that if the disease is detected early, patients “can be treated with much less medication than the same patient who is detected much later, where the immune system is more damaged and therefore it requires much more expensive treatment, and the risk of joint damage is so much higher.”

Thiusius Rajeeth Savarimuthu, professor of medical robotics at the University of Southern Denmark, says ARTHUR is not there to “throw the specialist off track”.

They’re only doing what they’re very good at, he says, and tailoring treatment to each patient will still be up to doctors.

3. Wildlife across Europe has grown tremendously over the last 50 years.

A coalition of conservation organizations regularly publish reports on how animal populations are changing across Europe. Our World in Data, an online scholarly publication based at the University of Oxford, has been watching them.

By the first half of the 20th century, many of Europe’s mammals had been reduced to a fraction of their historical levels as a result of millennia of hunting, exploitation, and habitat loss.

However, numbers across Europe have increased dramatically over the last 50 years.

Badger populations have doubled on average, while otter numbers have tripled. Deer has more than tripled. Beavers, European bison and Iberian lynx have also seen much higher numbers than previously.

So how did Europe write this success story?

According to Our World in Data, by stopping the activities that were killing mammals in the first place.

Effective protection against hunting, overexploitation and destruction of habitats was crucial.

They say the work of conservationists and their supporters has been vital. From fighting for wildlife policies and hunting quotas, the commitment of people like you is at the heart of this comeback of wild mammals.

4. A new academic paper has confirmed the power of swear words

New research says swearing can make you happier, fitter, more pain-resistant, and boost your alertness and memory. The effects can include a range of psychological, cognitive and emotional consequences.

In one study, subjects who raged with swear words were able to keep their hands in a bucket of ice water longer than non-swearers. Singing a swear word has also been shown to increase muscle performance during exercise.

Messages with incantations are considered more genuine than those without.

Of course, that doesn’t mean you should curse all the time. Swear words can be perceived as a form of aggression; Context matters. But if used wisely, they can play to your advantage.

5. The free orchestral performance of all Beethoven symphonies at Christmas

Acclaimed conductor Gustavo Dudamel believes music has the power to heal, unite and inspire. With this in mind, he decided to give a gift to the post-pandemic world.

Dudamel has publicly released videos of all nine of Beethoven’s symphonies performed by the renowned Simón Bolívar Symphony Orchestra of Venezuela at the stunning Palau de la Música Catalana in Barcelona.

The Palau de la Música has approved the release of the videos and they will be available throughout the Christmas period.

Numerous studies have shown that listening to classical music can improve brain function and sleep patterns, the immune system and stress levels. For Dudamel, it can also help the soul.

“I believe that music and art will play a very important role in society’s post-pandemic recovery, for our souls, for our psyches,” he said.

See you soon and remember that it can be difficult to find them in the headlines, but some news can be good news.