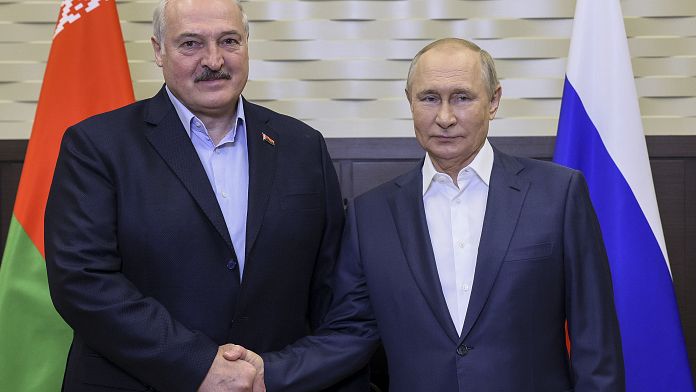 Vladimir Putin travels to neighboring Belarus on Monday for talks with Alexander Lukashenko as Russian troops prepare to hold exercises there amid nervousness in Kyiv that the country could once again serve as a base for a renewed attack on Ukraine.

President Volodymyr Zelensyy said Ukraine is ready for all possible defense scenarios against Moscow and its allies.

“Protecting our borders, both with Russia and Belarus, is our constant priority,” Zelenskyy said after a meeting of Ukraine’s top military command on Sunday. “We are preparing for all possible defense scenarios.”

Officials in Kyiv have been warning for months that neighboring Belarus – one of Russia’s closest allies – could join Russian forces and once again serve as the launch pad for a new attack to form a second front in the months-long war.

Belarus has allowed its territory to be used as a launch pad for Moscow’s February 24 invasion of Ukraine, but has not directly engaged in the fighting. Lukashenko has repeatedly stated that he has no intention of sending his country’s troops to Ukraine.

The Kremlin describes the Russian president’s trip, his first to Belarus in three and a half years, as a broad “working visit”.

“Air defense systems are deployed in the region,” Oleksiy Kuleba, governor of the Kyiv region, told Telegram. “Stay in shelters and safe places until the alarm is over. Take care of yourself and your loved ones.”

Several loud explosions were heard, but it wasn’t immediately clear whether they were air defense systems destroying the drones or drones hitting their targets.

The Ukrainian leader said power has been restored to three million other Ukrainians in the past 24 hours after a massive rocket attack on power infrastructure that killed three people and damaged nine power plants. That means nine million Ukrainians were reconnected over the weekend, he added.

Zelenskyy told Ukrainians the forces were holding on in the town of Bakhmut – the scene of the fiercest fighting in the country in many weeks as Russia attempts to advance into eastern Ukraine’s Donetsk region.

“The battlefield in Bakhmut is critical,” he said. “We control the city, although the occupiers are doing everything to ensure that no undamaged wall is left standing.”

Denis Pushilin, the Russian-appointed administrator of the Moscow-controlled part of Donetsk region, said Ukrainian forces shelled a hospital in the city of Donetsk, killing one person and wounding several others.

The Battlefield accounts could not be verified immediately.