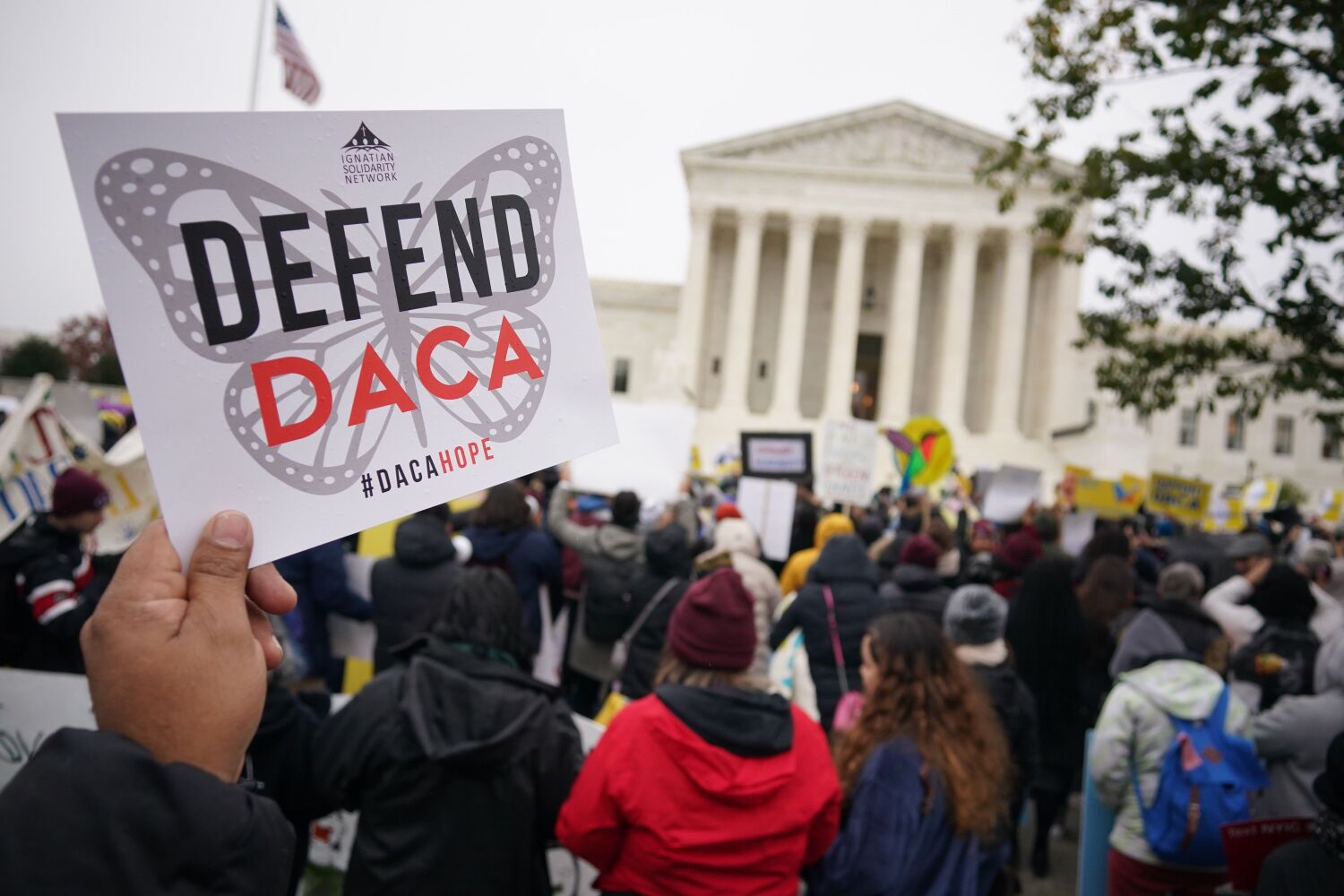 Congressional leaders hoping to reach an agreement on immigration reform before the end of the year faced a difficult chance of getting proposals to vote.

Democrats saw the lame duck session between the election and the start of the new Congress as their last chance to pass significant legislation before losing their majority in the House of Representatives. Among the immigration-related laws under consideration were bills that would have provided avenues to citizenship for so-called dreamers, farm workers and Afghans evacuated to the US since last year; and another that would have removed the cap on the number of green cards granted to people from a given country each year.

As of Wednesday evening, none of the bills had been brought forward.

“I’m not giving up on you – don’t give up on me. We will fight for you to win,” Sen. Richard J. Durbin (D-Ill.) told dozens of Dreamers at a rally last week, his voice cracking with emotion.

The moment highlighted the apparent frustration lawmakers felt as another opportunity to make changes to the immigration system came and went.

Perhaps the broadest and best-known of the proposals came from independent senators. Kyrsten Sinema of Arizona and the Republican Senator. Thom Tillis of North Carolina, whose legislation would have boosted border security funding and the use of detention facilities in exchange for a path to citizenship for some 2 million immigrants brought to the United States as children.

Tillis and Sinema had reportedly been in talks for months over the deal, which would also have extended the controversial pandemic policy called Title 42, which allows for the quick deportation of migrants at the border without an opportunity to seek asylum.

While some immigrant advocates have been cautiously optimistic about the bill, House Democrats, including Rep. Lou Correa (D-Santa Ana), have said couldn’t support it and House Republicans including Texas Rep. Chip Roy said securing the border should not be coupled with a path to citizenship. The text of the bill was never prepared and time for a plenary vote was running out.

Cris Ramón, an independent global migration analyst, said the Border Patrol Union’s support for the Tillis and Sinema framework is promising for reaching a compromise.

“One of the main things that stands in the way is the feeling that whatever they introduce has to fix the limit on the first try,” Ramón said. “The boundary is incredibly dynamic—it’s constantly changing and shifting.”

After a federal judge ordered Title 42 to be lifted by Thursday, the Department of Homeland Security braced for a spike in migrant crossings at the U.S.-Mexico border. But on Monday the Supreme Court temporarily suspended that this does not happen and leave the policy in place for the time being.

At the Lutheran Church of the Reformation in Washington, Durbin told Dreamers, who had gathered for a rally, last Thursday that he had tried to get the votes for legislation to protect their status, but that he was winning over Republicans had come short.

Durbin wrote the first version of the DREAM Act in 2001 in an effort to provide a route to permanent residence for immigrants who came to the United States as children. Over a decade later, then-President Obama established the Deferred Action for Childhood Arrivals program, widely known as DACA, to temporarily protect skilled immigrants from deportation.

Juliana Macedo do Nascimento, assistant director of federal prosecutions for United We Dream and a DACA recipient herself, said she was disappointed with the lack of progress during the lame duck session. A federal court case against DACA is expected to reach the Supreme Court, where proponents predict the Conservative majority will declare the program illegal. Macedo do Nascimento said she worries Congress will wait until the last minute to act to protect people like her.

“I feel like sometimes they forget they’re dealing with real people’s lives,” she said. “It feels really dehumanizing.”

Another bill, which never received approval, would have phased out annual limits on the number of employment-based green cards issued per country of origin, while doubling the per-country cap for family-based green cards. Current restrictions have disproportionately hit people from India and China, who make up a significant proportion of immigrants with high-skill work visas and often wait decades to become permanent residents; as well as people from Mexico and the Philippines who are facing family sponsorship arrears.

Critics warned that removing per-country caps without increasing the number of green cards available annually would result in most applicants from a few countries leaving at the expense of those from all other countries. In a letter Writing to her fellow Congressional Black Caucus earlier this month, Rep. Yvette D. Clarke (DN.Y.), “I cannot support efforts that would perpetuate the current injustices in our immigration system.”

During the 12/13 parliamentary debate, Rep. Zoe Lofgren (D-San Jose) said the Congressional Research Service had concluded that the law would not adversely affect applicants from Africa or the Caribbean and urged Congress to “bringing the immigration system away from its racist origins”. The bill was removed from the voting schedule the next day.

One bill that made it to the vote was the Veteran Service Recognition Act, that would have protected immigrants who served in the US military from deportation and made it easier for deportees to return. But after the House was vacated earlier this month, the bill has not been taken up by the Senate.

Efforts to add significant immigration provisions to the federal defense law have also been unsuccessful, including a proposal to protect so-called documented dreamers from aging if they turn 21 without qualifying for legitimate status under their parents’ visas.

Another proposal that has yet to move forward is the Afghan Adjustment Act, which would provide additional security clearances and a path to citizenship for more than 70,000 Afghans resettled in the US under temporary status that expires after two years. This bill garnered broad bipartisan support, as well as support from more than 40 prominent retired military officers who wrote in a letter to Congress Saturday that failure to enact it would make the US less secure.

“Potential allies will remember what is happening now with our Afghan allies,” they wrote.

Advocates hoped safeguards for Afghans would land as part of the $1.7 trillion funding move in the works to avert a government shutdown. Legislators tried to put as many items on their legislative wish lists as possible without holding back the overall package from moving forward. A partial government shutdown begins on Saturday if the law fails.

The draft package released Tuesday provides the Department of Homeland Security more than $86 billion, with increased funding for frontier technology, maritime security and migrant detention, according to a summary published by House Appropriations Committee chair Rosa DeLauro (D-Conn .), has been published.

Bill provides money to hire 300 more border patrol agents Provides US citizenship and immigration services with $133 million for refugee processing Rejects attempt by Biden administration to reduce immigrant detention capacity by more than 25% to cut — rather than maintain 34,000 beds — and earmarks $800 million to help nonprofits and local governments as migrants arrive in places like El Paso.

The omnibus is also extending the Special Immigrant Visa Program, which offers green cards to Afghans who have worked with the US government, increasing the cap on them by 4,000 visas to 38,500. But it does not include protection for those already here, many of whom do not qualify for the program and must seek asylum or risk deportation.

Proponents also hoped to include a last-minute Senate bill in the omnibus package to offer a path to citizenship for those who have been farm workers for more than a decade. The Affordable and Secure Food Act, unveiled last week, would modify and expand the H-2A visa program, which US employers can use to hire seasonal migrant workers — and allow them to keep some workers year-round. It would also require agricultural employers to use E-Verify, the electronic system that checks workers for legal work permits.

But the bill lacked public support from Republicans and was rejected by the American Farm Bureau. In a speech Monday night in the Senate, Sen. Michael Bennet (D-Colo.) urged his peers to act.

“Are we really going to accept as a defining issue for this country that we want fields full of contract staff?” he said.

On Wednesday, supporters of Afghanistan’s Adaptation Law pushed for a ground change to include its safeguards in the omnibus package, though the move was far-fetched. The day ended with the Senate deadlocked over an amendment by Sen. Mike Lee (R-Utah), who would extend Title 42 at the border, threatened passage of the bill.

Kristie De Peña, director of immigration at the Niskanen Center, a Washington think tank, said that while hopes of change were dashed at this session, the need for an overhaul of immigration rules was becoming more urgent.

“We haven’t reached the breaking point yet, but there will be a cliff,” she said. “If we get that close [to achieving change]it is clear that the political solutions are out there.”