The Taliban prohibit women from working for foreign and local NGOs 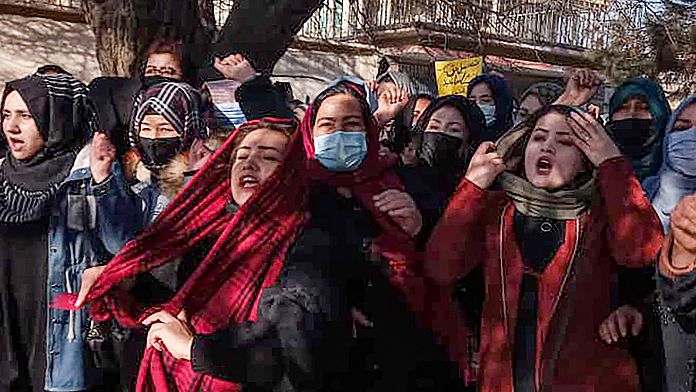 The Taliban government on Saturday ordered all foreign and domestic NGOs in Afghanistan to stop hiring women, allegedly because some female employees did not properly wear the Islamic headscarf. The ban was the latest restrictive move by Afghanistan’s new rulers against women’s rights and freedoms.

The development comes just days after the Taliban banned female students from attending universities across the country. Since then, Afghan women have been demonstrating in major cities against the ban, a rare sign of internal protests since the Taliban seized power last year. The decision has also sparked outrage and resistance in Afghanistan and beyond.

The order came in a letter from Economy Minister Qari Din Mohammed Hanif, which said any NGO not complying with the order would have its license to operate in Afghanistan revoked. Ministry spokesman Abdul Rahman Habib confirmed the contents of the letter to The Associated Press.

The ministry said it had received “serious complaints” about female NGO workers not wearing the “correct” headscarf or hijab. It was not immediately clear whether the order applies to all women or only to Afghan women working in the NGOs.

Further details were not immediately available amid fears that the Taliban’s recent ban could be a springboard for a blanket ban on Afghan women from leaving the home.

“This is a heartbreaking announcement,” said Maliha Niazai, a master trainer at an NGO that educates young people on issues such as gender-based violence. “Aren’t we human? Why are they treating us with this cruelty?”

The 25-year-old, who works at Y-Peer Afghanistan and lives in Kabul, said her job is important because she serves her country and is the only person supporting her family. “After this announcement, will the officials support us? If not, why are they snatching food out of our mouths?” she asked.

Another NGO worker, a 24-year-old Norwegian Refugee Council worker from Jalalabad, said it was “the worst moment of my life”.

“The job gives me more than a … livelihood, it’s a representation of all the effort I’ve put in,” she said, declining to give her name for fear for her own safety.

Also on Saturday, Taliban security forces used a water cannon to disperse women protesting the ban on university education for women in the western city of Herat, eyewitnesses said.

According to witnesses, about two dozen women were on their way to the Herat provincial governor’s home on Saturday to protest the ban – many chanting “education is our right” – when they were pushed back by security forces firing water cannons.

Video shared with the media showed the women screaming and hiding in a side street to escape the water cannons. They then continue their protest with chants of “Shameful!”

One of the protest organizers, Maryam, said between 100 and 150 women took part in the protest, moving in small groups from different parts of the city to a central meeting point. She did not give her last name for fear of reprisals.