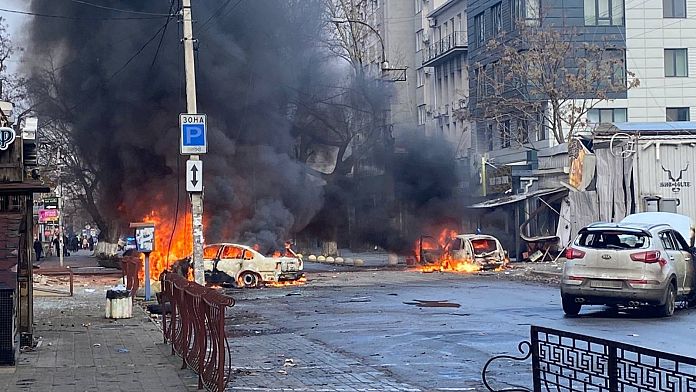 Russian shells slammed into the southern Ukrainian city of Kherson on Saturday, killing seven people and injuring 58 others.

Ukrainian President Volodymyr Zelenskyy, who had just returned from his brief trip to Washington, posted photos of the wreck on his social media accounts. He noted that the destruction came as Ukrainians began celebrations of Christmas, which for many Orthodox Christians will culminate in the traditional January 7 celebration.

“This is not sensitive content – this is the real life of Kherson,” Zelenskyi tweeted. The images showed burning cars, dead bodies on the street and broken building windows.

Deputy head of the presidential office Kyrylo Tymoshenko said seven people were killed and 58 injured, at least 16 of them seriously, in the shelling of Kherson on Saturday.

Saturday marked 10 months since the start of the Russian invasion.

Ukraine has been under renewed onslaught from Russian artillery, missiles, shelling and drone strikes since early October, much of which is targeting energy infrastructure in a bid to cut power and heating supplies as the freezing winter encroaches.

Shelling in Kherson has been particularly intense since Russian forces withdrew and the Ukrainian army retook the southern city in November.

Earlier on Saturday, Donetsk regional governor Pavlo Kyrylenko said two people were killed and five injured there over the past day. The deaths occurred in Kurakhove, a town of about 20,000 people located 30 kilometers west of the Russian-controlled city of Donetsk.

A total of about 60 shells hit three municipalities in the Nikopol area overnight, said the regional governor of Dnipropetrovsk, Valentyn Reznichenko.

Stepne, a settlement on the outskirts of Zaporizhia, was also hit by shells, but details of the victims were not available, according to the local governor.