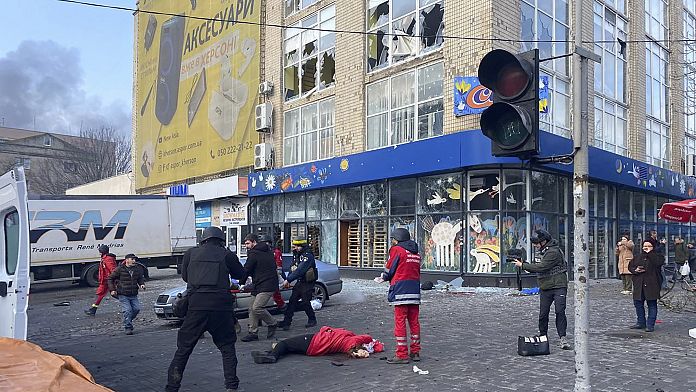 In Mariupol, in south-eastern Ukraine, which is occupied by Russian forces, Moscow-appointed authorities erected a 20-metre-tall Christmas tree.

The tree was transported all the way from St. Petersburg to the city.

However, officials said there will be no mass holiday celebrations this year in this city, which was badly damaged by Russian shelling.

In nearby Kherson, at least seven were killed and 58 injured in a Christmas Eve strike.

Russian shells rained around a busy market in the southern port city, starting a fire.

The city was recaptured by Kiev’s forces in November. Despite Russia’s withdrawal from the city, Kherson remains within reach of Moscow’s guns and under constant threat.

But Kherson has been regularly bombed ever since, taking a heavy toll on the civilian population and the city’s electricity supply.

December 24th also marks 10 months since the start of the Russian invasion.

Zelenskyy acknowledged that amid the ongoing war with Russia and for those not around the dinner table, the holiday would have a “bitter” flavor.

Fighting is still raging in the eastern Kharkiv region and around Bakhmut, where Ukrainian and Russian forces have clashed in a bitter struggle that has lasted for months.