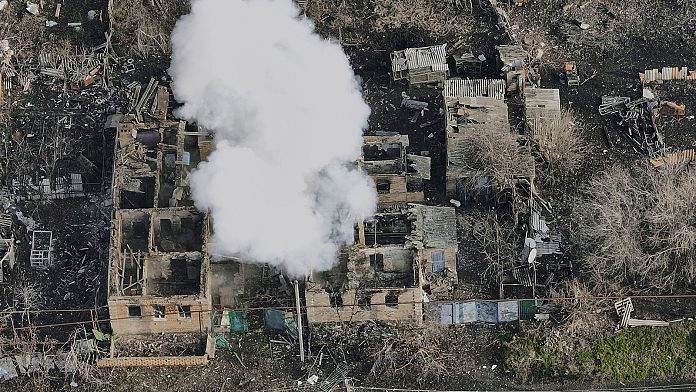 Russian forces fired 33 rockets at civilian targets in the Ukrainian city of Kherson in the 24 hours leading up to early Wednesday, the Ukrainian military said.

The General Staff of the Ukrainian Armed Forces said in its morning report that Russian forces are attacking populated areas on the right bank of the Dnipro River near Kherson with mortars and artillery.

Russian forces abandoned Kherson last month in one of Ukraine’s most significant victories in the 11-month war, but fighting entered a slow, attritional phase as the bitter winter weather set in.

“In terms of the front line, little has changed, but enemy pressure has increased, both in terms of the number of men and the type and amount of equipment,” said Ukrainian military analyst Oleh Zhdanov.

The heaviest fighting took place around the eastern town of Bakhmut, a bombed-out ghost town that Russia has been attempting to storm for months with enormous loss of life, and further north in the towns of Svatove and Kreminna, where Ukraine is attempting to breach Russian defenses.

In Bakhmut, home to 70,000 people before the war and now in ruins, Reuters reporters saw fires burning in a large apartment building. Debris littered the streets and the windows of most buildings were blown out.

“Our building is destroyed. There was a shop in our building, now it’s gone,” said Oleksandr, 85, adding he was the only remaining resident there.

Nearby, Pilaheia, 73, said she was used to the “constant explosions.”

Russia wanted to subjugate Ukraine within days, but its forces were defeated on the outskirts of the capital Kyiv in the spring and forced to withdraw from other areas in the fall.

Putin responded by calling up hundreds of thousands of reservists for the first time since World War II.

Putin retaliated against a price cap on his oil imposed by Western countries on Tuesday, saying Russia will ban oil sales to countries that comply with the cap imposed on December 5.

Unseen even during the Cold War era between the West and the Soviet Union, the cap aims to cripple Russia’s military effort in Ukraine – without angering the markets by actually blocking its oil supplies.

Below the cap, oil traders wanting to retain access to Western financing for such crucial aspects of global shipping as insurance must promise not to pay more than $60 a barrel for Russian sea oil.

That’s close to the current price of Russian oil, but far below the prices at which Russia was able to sell it for much of last year, when unexpected energy gains helped it offset the impact of financial sanctions.

Putin’s oil ban decree was presented as a direct response to “unfriendly and unlawful actions by the United States and foreign states and international organizations that align themselves with them.”

The ban would halt the sale of crude oil to countries participating in the price cap from February 1 to July 1, 2023. A separate ban on refined oil products such as gasoline and diesel would come into effect on a date to be determined by the government. Putin would have the power to override the measures in special cases.

Russia is the second largest oil exporter in the world after Saudi Arabia, and any real disruption in its sales would have far-reaching consequences for global energy supplies.

3. “We know what needs to be done,” says Zelenskyj and promises to expel the Russian troops

In the past few days, Putin has repeatedly spoken of the desire for peace talks.

But his foreign minister, Sergei Lavrov, made it clear that Russia has preconditions, including that Ukraine recognizes the violent conquest of about a fifth of Ukrainian territory, which Russia says it has annexed.

Ukraine says it would never agree to give up land.

Zelenskyy has endorsed a 10-point peace plan, discussed it with US President Joe Biden, among others, and called on world leaders to hold a global peace summit.

In a late night address on Tuesday, Zelenskyy said a military command meeting had “determined the steps to be taken in the near future.”

“We will continue to prepare the armed forces and security of Ukraine for the next year. This will be a crucial year. We understand the risks of winter. We understand what needs to be done in the spring,” he said.

4. Italy is reluctant to supply Ukraine with air defense systems

Italy’s defense minister struck a cautious note on whether Italy would be able to supply Ukraine with air defense systems, as requested by President Zelenskyy.

The systems would be provided “if possible,” Guido Crosetto told the newspaper Il Messaggero in an article published on Wednesday.

“However, if we give Ukraine air defense missiles, we must take them from our stocks and we must do this without running out of them and be sure of the quality,” he added.

Crosetto told Reuters this month that the Franco-Italian SAMP/T air defense system was among military aid Kyiv had requested from Rome.

His comments to Il Messaggero follow a Tuesday call between Zelenskyy and Italian Prime Minister Giorgia Meloni, after which Zelenskyy tweeted that Rome was considering supplying air defenses.

He is urging Ukraine’s western allies to step up military aid to repel a three-month Russian missile and drone attack on civilian infrastructure.