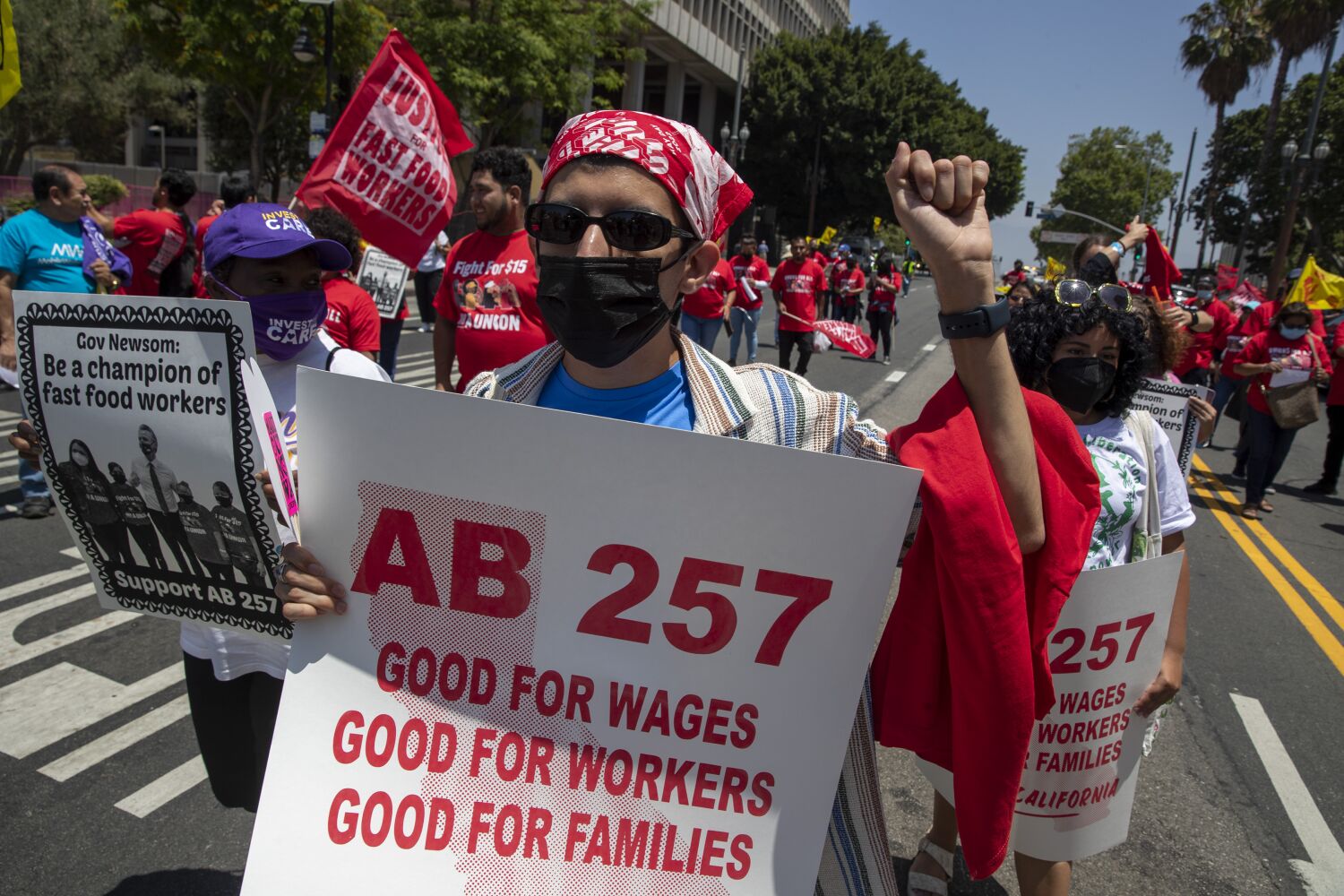 A group of businesses and restaurant trade groups sued Thursday to prevent California from implementing a new labor law that improves protections for fast-food workers.

Among other things, the landmark California law would create an employee representative body with the power to raise wages.

The group known as Save Local Restaurants is trying to qualify a referendum that would put the law on hold and ask California voters whether to keep it or repeal it in the November 2024 vote. Save Local Restaurants submitted just over 1 million unconfirmed signatures this month, well above the minimum required, making it likely that the referendum will be allowed to vote.

Because the signature verification process is still ongoing, the California Department of Industrial Relations wrote to the coalition saying that the law would pass on January 1.

In a statement Thursday, Gov. Gavin Newsom’s office repeated the plan, AB 257, also known as the Fast Recovery Act, on 1/14.

“The … law gives fast-food workers a seat at the table to set fair wages and important health and safety standards. Although industry supports a referendum move, the Secretary of State has not confirmed it has enough signatures to qualify to vote,” Erin Mellon, a spokeswoman for the governor, said in an email. “The state has an obligation to implement this important law as long as it does not happen. We will of course comply with any court order.”

The industry coalition said the law’s entry into force would set a “dangerous precedent” threatening voters’ right to a referendum. The group filed the lawsuit in Sacramento County Superior Court to “ensure that the democratic process established by the California Constitution is respected.”

When the foreign minister issued a statement in December. On February 9, the coalition confirmed that AB 257 confirmed a sufficient raw number of signatures submitted and became “ineffective and unenforceable in its entirety.”

The lawsuit represents another wrangling over AB 257 amid allegations by labor lawyers who sponsored the law that signatures were fraudulently obtained and criticism that deep-pocketed industries have increasingly turned to ballots for progressive ones Delay laws being passed by the state legislature.

More than 50 referendum measures have qualified for the California vote in the century since the inception of the referendum process, but “in not one of those previous instances has the state ever attempted to temporarily enforce said law while the signature verification process was underway,” Kurt said Oneto, attorney at law firm Nielsen Merksamer representing referendum supporters.

“By continuing to implement AB 257, the state would set a damaging precedent that would effectively render the state’s referendum process meaningless,” Oneto said in a statement.

In Tuesday’s letter to the coalition, Katrina Hagen, director of the Department of Industrial Relations, said she and her staff were working to set up the Fast Food Council created by AB 257 and were “committed” to implementing the law “in the absence of one.” to proceed with clear authority”. provided that AB 257 will only be suspended on presentation of unauthenticated signatures.”

Hagen wrote that the law would be put on hold “if and when” the referendum challenging it qualifies for voting.

The lawsuit, in response, argues that referendum advocates have the power to prevent an “objectionable law from otherwise going into effect” by calling their end to the process — collecting and submitting the minimum number of signatures to county election officials – complete before the 90-day period has expired.

“Any additional, purely administrative, time required by election officials to complete the signature verification process or ‘certify’ the action for voting must not undermine or interfere with this constitutional right to a referendum,” the lawsuit states.

The lawsuit seeks an injunction requiring California officials to wait until the 11th implementation of the law until the signature verification process is complete and, if there are enough valid signatures to qualify the referendum for voting, until voters cast their ballots.

AB 257, signed into law by Gov. On Labor Day, Gavin Newsom creates a mandate for a unique council to set standards for fast-food wages, hours, and other working conditions.

The law will require the signatures of 10,000 fast-food restaurant employees to move forward establishing the council once the law goes into effect. Service Employees International Union California, which sponsored AB 257 and is resisting efforts to overturn it, said it submitted almost double the number of signatures required by the law establishing the Fast Food Council.

The coalition’s efforts “come straight out of the corporate guide that Californians have unfortunately come to know too well. … This abuse of the referendum system must stop,” said Tia Orr, executive director of SEIU California, in an emailed statement. “While workers are eager to gather around the table to begin improving their industry, they respect the state’s constitutional and democratic processes and look forward to administrative verification of their signatures.”

Officials from the Department for Industrial Relations and the Office of the Foreign Secretary did not immediately respond to requests for comment.

A Justice Department spokesman said the California Department of Industrial Relations is the attorney general’s client on the matter and declined to respond to questions.

Counties have until Dec. 1, 25-30 business days from Dec. 9 notice — to conduct a random verification of signatures.