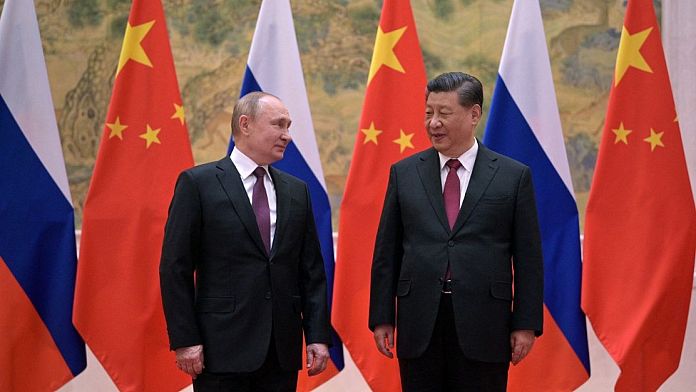 Russian President Vladimir Putin and Chinese leader Xi Jinping announced on Friday that they would deepen their bilateral cooperation against the background of the Moscow war in Ukraine.

Putin and Xi did not directly mention the raging conflict in their opening speeches via video conference, before going into private talks.

The pair hailed the strengthening of Moscow-Beijing ties amid “geopolitical tensions” and a “difficult international situation,” with Putin expressing his desire to expand military cooperation.

“With geopolitical tensions rising, the importance of the Russian-Chinese strategic partnership as a stabilizing factor is growing,” he said.

The Russian leader said he expects Xi to visit Moscow in the spring.

Such a trip, he said, would “demonstrate to the whole world the strength of Russo-Chinese relations on key issues, [and] will be the most important political event of the year in bilateral relations”.

Xi, in turn, said through a translator that “in the face of a difficult and far from easy international situation,” Beijing is ready to “intensify strategic cooperation with Russia.”

The Chinese state broadcaster CCTV described the events in Ukraine as a “crisis”.

The term marked a departure from China’s usual references to the “Ukraine situation,” and the change may reflect growing Chinese concerns about the direction of the conflict.

Relations between the two countries have grown stronger since Putin sent his troops to Ukraine on February 24. Just last week, Moscow and Beijing conducted joint naval exercises in the East China Sea.

China has explicitly refused to criticize Moscow’s actions in Ukraine, accusing the US and NATO of provoking the Kremlin and has blasted punitive sanctions imposed on Russia.

Russia, in turn, has been heavily supportive of China amid tensions with the US over Taiwan.