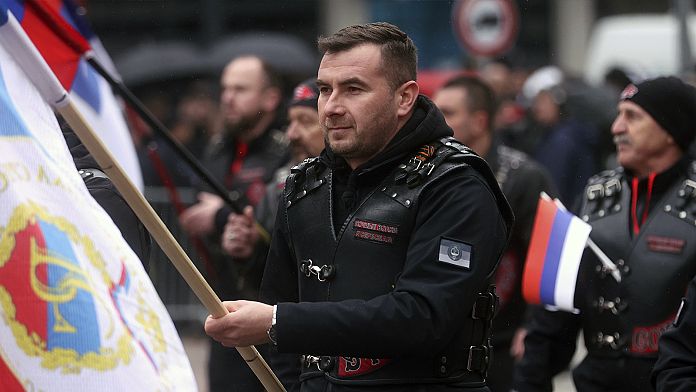 Thousands of flag-waving ethnic Serbs gathered on the outskirts of the capital Sarajevo on Monday to celebrate an unconstitutional holiday linked to Bosnia’s brutal war in the 1990s.

A military-style parade was part of a series of celebrations that the ethnic group’s separatist leader, Milorad Dodik, also used to pledge his allegiance to Russia, which the Serb-majority entity of the Republika Srpska (RS) celebrates as their “national day”.

Notably, the local branch of the Night Wolves also took part in the parade, a violent Russian motorcycle club that is staunchly supportive of Russian President Vladimir Putin.

As motorcyclists passed the podium from which Dodik, other Bosnian Serb officials and Serbian Foreign Minister Ivica Dačić watched the parade, an announcer over loudspeakers praised their mission to “promote Orthodox Christianity and make the Republika Srpska as powerful and eternal as… to make Mother Russia”.

The Kremlin-funded Night Wolves are known to have fought alongside Moscow-backed forces in Ukraine’s Crimea and Donbass in 2014.

Earlier, as part of the celebrations, which were strongly condemned by the United States and the European Union, Dodik announced that his administration would bestow his administration’s highest medal of honor on Putin for his “patriotic concern and love” for the RS.

“Putin is responsible for developing and strengthening cooperation and political and friendly relations between the RS and Russia,” Dodik said at the award ceremony in the Bosnian Serbs’ administrative center, Banjaluka.

European Commission spokesman Peter Stano said in Brussels on Monday that siding with Putin “isolates the Republic of Srpska and its leadership internationally.”

“There is no place in the EU to honor and award politicians who order the destruction of a neighboring country and the murder of its people,” he added.

The January 9 holiday marks the date in 1992 that the Bosnian Serbs declared the establishment of their own state in Bosnia, sparking the war that killed more than 100,000 people and left millions homeless.

It was ruled illegal at the state level by Bosnia’s constitutional court in 2015 for discriminating against the country’s other two main ethnic groups – Bosniaks and Croats.

During the war, a campaign of violent ethnic cleansing, culminating in the 1995 Srebrenica genocide, resulted in Bosniaks and Croats being almost completely exterminated from the now Serb-administered half of Bosnia.

After the war, under the terms of the US-brokered Dayton Peace Accords, Bosnia was divided into two administrative entities – the Republika Srpska and the Bosniak-Croat-majority Federation of BiH.

Each has its own government, parliament, and police force, but the two are linked by common state-level institutions, including the judiciary, army, security agencies, and tax administration.

The complex system, involving numerous bodies at several levels of government, is considered one of the most complicated in the world.

Furthermore, the system created in Dayton is highly ethnicized, meaning that all decision-making power in the country remains entirely in the hands of the three ethnic groups.

Dodik, currently president of the Republic of Srpska, has advocated separating the Bosnian Serb entity from the rest of the country for years.

He has maintained close ties with Putin despite Russia’s war in Ukraine, crediting him with defending the interests of his “Orthodox brothers” in Bosnia against what he on Monday described as “(Western) thugs” who have been trying for years to Serbs to rob their “freedom”, including freedom to celebrate the holidays and cooperate with allies of their choice.

“We love Republika Srpska and we love Serbia, and if there is political, human and divine justice, (then) we are one people, the Serbian people,” Dodik said.

Dodik’s increasing anti-Western rhetoric and vocal support for Putin’s policies have sparked fears in the West that the Kremlin could use him to create further instability in volatile Bosnia and divert some attention from its war in Ukraine.

The US embassy in Sarajevo warned Dodik that his demands for independence from Bosnia’s Serb-led party “coupled with flimsy legal claims about their competencies… put the country down a dangerous path.”

“Republika Srpska will only destroy itself and its surroundings that haunt the will-o’-the-wisp of independence,” the embassy tweeted on Monday.