Oscars 2023: Cate Blanchett is among the nominees for Australia. Who else made the list?

Dimension leap adventure Everything Everywhere All at Once topped the list of films nominated for this year’s Academy Awards as voters chose several audience hits to compete for Best Picture.
Everything Everywhere, a sci-fi film about a desperate woman struggling to pay her taxes, received 11 nominations, including best picture and four acting nominations.

Australian Cate Blanchett was nominated for Best Actress for her portrayal of a manipulative orchestra conductor in Tár, as was Michelle Yeoh for her leading role in Everything Everywhere.

Also among the nominees for acting were Austin Butler for his portrayal of rock legend Elvis Presley and Colin Farrell, who starred in Banshees as a farmer obsessed with restoring a friendship.
Other films vying for best picture include Avatar: The Way of Water, James Cameron’s sequel, which currently ranks as the sixth highest-grossing film of all time.

Top Gun: Maverick and Elvis, two of the Northern Hemisphere’s biggest summer blockbusters, also made it alongside Steven Spielberg’s coming-of-age film The Fabelmans, The Banshees of Inisherin, Tar, Triangle of Sadness, Women Talking and All Quiet on the western front. 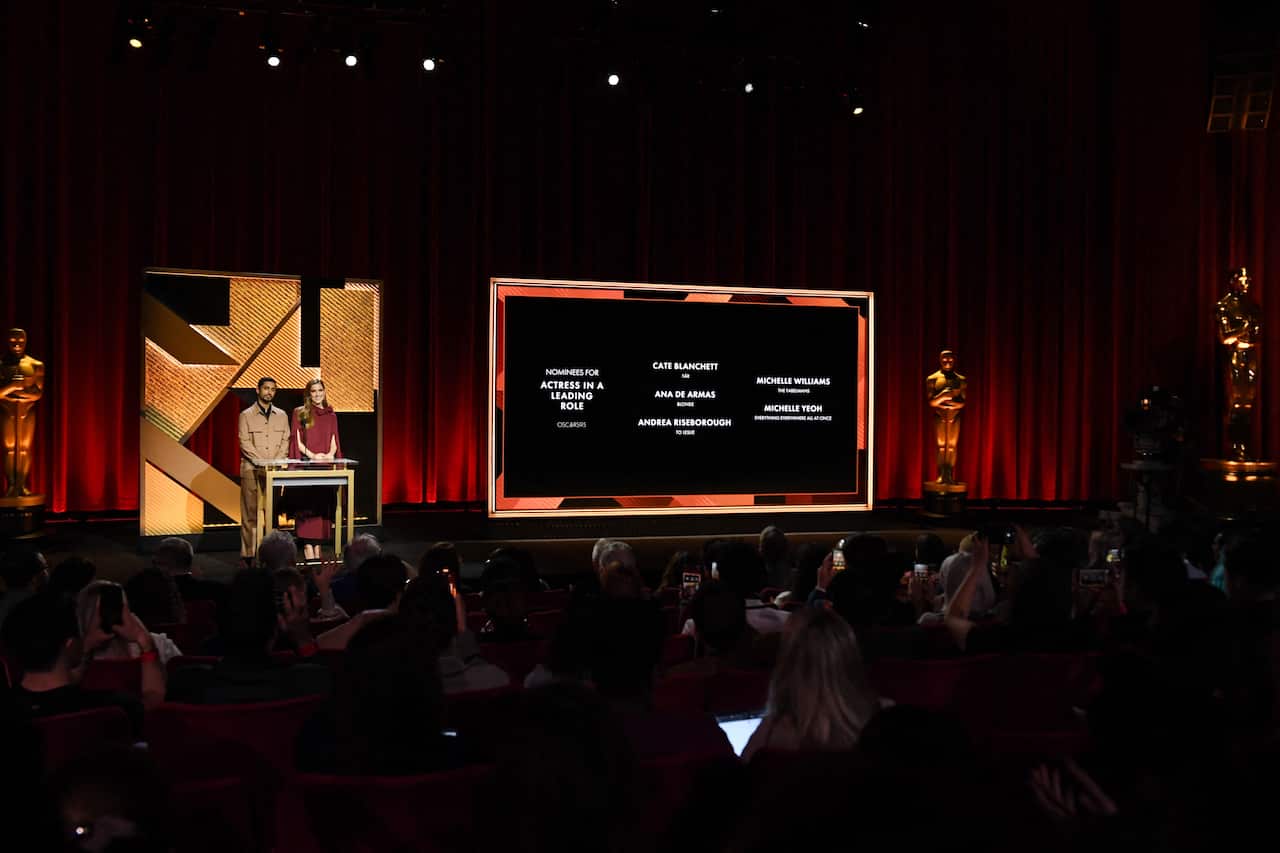 Actors Rizwan Ahmed (left) and Allison Williams announce the nominees for Best Actress in a Leading Role during the nominations announcement for the 95th annual Academy Awards at the Samuel Goldwyn Theater in Beverly Hills, California on Wednesday. Source: Getty / Valerie Macon

The winners of the industry’s top awards will be unveiled on March 12 at a ceremony hosted by comedian Jimmy Kimmel and broadcast live on the Walt Disney Co.’s ABC network.

The Oscars and other entertainment awards shows are struggling to attract TV viewers, especially younger ones who spend time on TikTok and YouTube.
Last year’s Oscars r, attracted around 15.4 million television viewers, the second-smallest audience ever.
A range of nationalities are represented on the 2023 Acting List, with nominations for artists from Australia, Cuba, Ireland and Malaysia – along with the United Kingdom and United States.
Ireland is particularly well represented, accounting for a quarter of all 20 actor nominations – with nods for Kerry Condon, Farrell, Brendan Gleeson and Barry Keoghan (The Banshees Of Inisherin) and Paul Mescal (on coming-of-age drama Aftersun). .

The winners are chosen by approximately 10,000 actors, producers, directors and filmmakers from the Academy of Motion Picture Arts and Sciences.